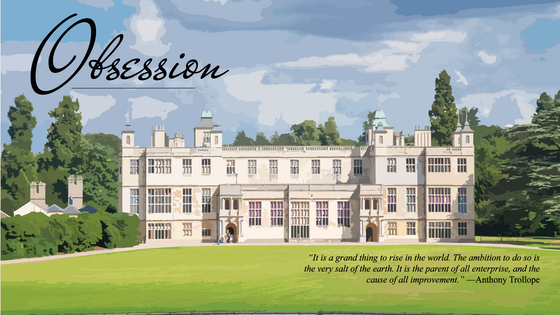 Victorian England, 1840. You are the head of a respected but financially troubled family estate; rooms are closed off to save on upkeep and heating, outside grounds have gone to seed, and the façade is in desperate need of restoration. It is far from the glory days of the estate, but you have new hope. A significant inheritance has made possible the restoration of the grand old manor house and rehabilitation of the family's reputation in the county of Cambridge! Obsession captures the experience of Regency and Victorian England—the beloved world of Jane Austen & Anthony Trollope—in a way that transports family and friends to that unique time and place.

Latest Updates from Our Project:

Nothing like an update that confuses everyone! Allow me to provide more clarity.

The only items moved to the base game are the two tiles used by the Wessex family for their family advantage (see the back of the Rulesheet at bottom). That's all! Such tiles are made with a custom diecut, and that capacity was already present in the base game.

All these bulleted items above will come in a stylish two-piece box and expand the variety of the base game. The reason for my apology and the addition of custom meeples, thicker tiles and boards, and a box insert to the base game was that the expansion was a little light on content for the Kickstarter price.

I will start with the apology. As a first time developer, I spent a good deal of time evaluating the price point for Obsession and the Wessex Expansion. In retrospect, I believe I got Obsession right and the expansion wrong.

Initially, the Wessex Expansion was to contain the extra Tennis Court and Breakfast Room to enable the new family Wessex player board. However, the cost of a small, stand-alone punchboard die for the expansion was prohibitive. Therefore, with extra punchboard capacity in the base game, I moved tile production there.

From the Glossary, Page 27:

The remaining components in the Wessex Expansion do not, in my opinion, justify what should have been a deeply discounted $15 price tag charged at the time of the Kickstarter. Which brings us to...

Since everyone who purchased the expansion necessarily purchased the base game, I poured additional value into the base game to make absolutely certain all supporters received extraordinary value for their pledge. These enhancements include, all at Kayenta Games expense:

The handmade prototype is clearly the product of a workshop. The finished insert, to be show in two weeks, will be pristine and bright white.

And the biggest upgrade? All cardboard components were increased from 2.0mm to 2.5mm—tiles, player boards, organisers, coins, chits, game board, and round track!

Printed 2.5mm components will be shown in two weeks (post-production sample) and used in all the planned gameplay/instructional videos. I will mention that the increased weight of the game (now at almost 5 pounds) resulted in the flat shipping fee being even more of a value (ouch).

The final version of both the Rulebook and Glossary can be found here at BoardGameGeek, if you're ready for some homework.

I will post an update with video of the production quality insert and 2.5mm board/tile thickness in about two weeks, at which time I will offer a more accurate production/shipping timeline.

This week, Obsession went off to Panda Games for mass production. After the last four months of game design enhancements, my energy level is that of Phidippides after the Battle of Marathon; hopefully, I don't end up like him (seems like a footman is the appropriate meeple here)!

I apologize for not posting an unboxing video for the second preproduction copy (PPC); I dove into the box when it arrived and found some issues that had to be corrected. That's why we do PPCs, but I don't think it would have made good viewing (LOL).

With production underway, I am beginning a series of new gameplay and solitaire videos with the new art to replace the current ones posted on my YouTube channel and BoardGameGeek.

Also, the rulebook and glossary are now up at BoardGameGeek, if you are interested. (FYI: I am going experimenting with resolution vs. reasonable file size for the download; please comment if you have a preference.)

Obsession is on schedule! The projection is that my fulfillment partners will be receiving product at the end of July. I will follow this closely and keep you updated.

In January, we got a first look at our custom meeple upgrade, which led to four of the six servants being revised. This week, the revised meeples arrived, and here is a short video looking the new Underbutler, Footman, Valet, and Lady's Maid!

(Spoiler: The Footman is my new favorite!)

The submission of the project for the final PPC (pre-production copy) depended on these custom meeples; not only to confirm that we love them, but also to have meeple-related artwork for the rulebook and glossary.

With the custom meeples done, the rulebook and glossary will be submitted with the already completed final components so that the final PPC can be approved in the 1st week of April (we will have another Panda-wrapped unboxing then). After that...mass production!

The game is a skosh ahead of schedule; I am optimistic that deliveries will begin in late July.

The preproduction copy (from Panda Games) is in my hands! I apologize in advance for the poor quality of the audio; I was too excited to remember to plug in the iPhone microphone.

Note that this activity is primarily an art review. This is not how the game will be packaged.

Everything is on schedule, even a couple weeks ahead of schedule. All changes are minor production tweaks common to preproduction copies.